Take a closer look at one of the craziest drift cars on the planet, utilising the best that the global aftermarket performance industry has to offer to build a Lexus RC F that’s shed nearly a third of its weight and makes more than double its standard horsepower! 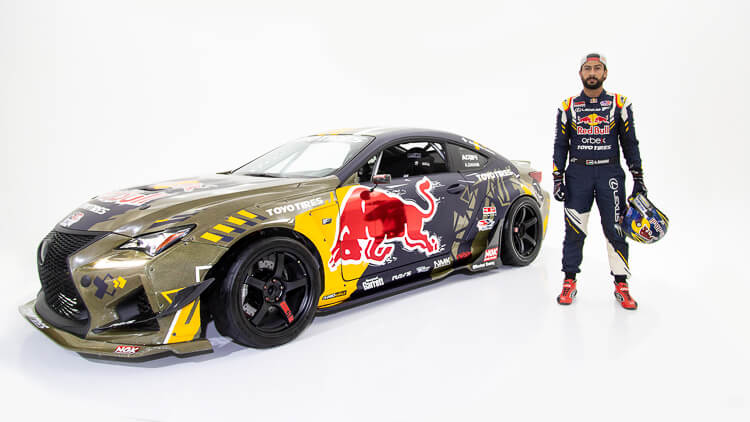 Debuting in 2011 and winning his first 3 professional drifting events, Jordanian Ahmad Daham has become a household name in the Middle East’s drift community, going on to win an impressively long list of events and championships along with a Guinness World Record for the longest twin drift in 2014. 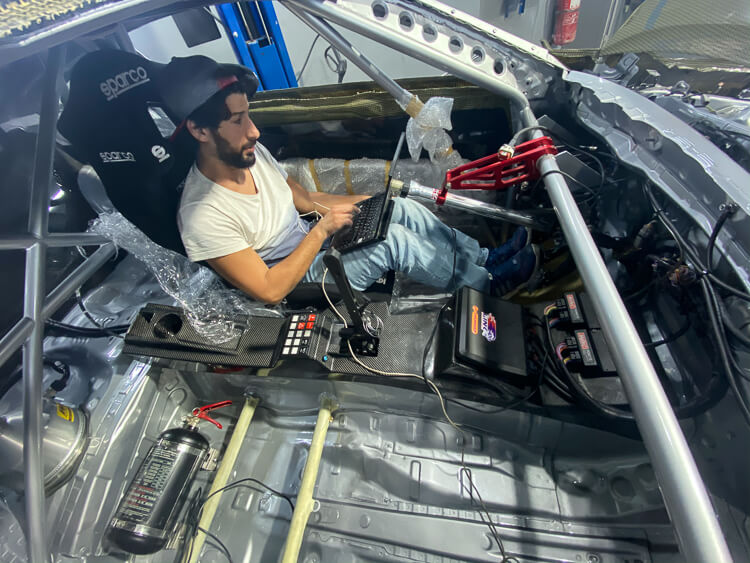 Ahmad is more than just a good driver though, with a teenage interest in motorsport growing into a passion to do it himself that saw Ahmad develop engine tuning skills and open NMK Performance, Jordan’s first dyno tuning workshop and the region’s industry leader that now services Egypt, Oman, Palestine, Saudi Arabia and Qatar. 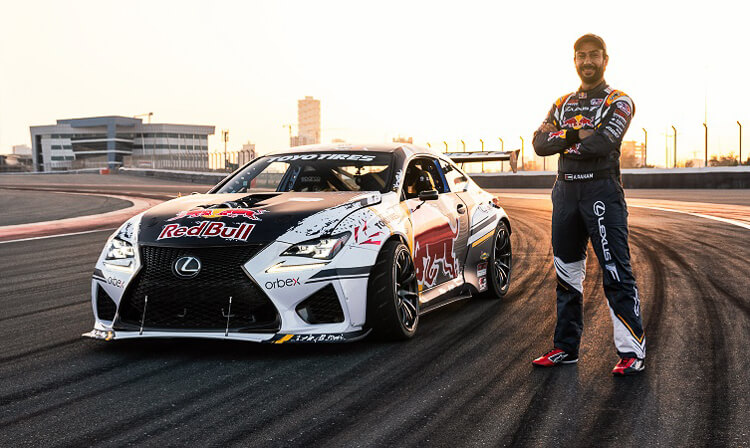 Ahmad’s undeniable talent in and out of the car earned him a spot in Red Bull’s drifting contingent and in 2019, with five Middle East Drift Championships under his belt, Ahmad became an ambassador for the Lexus F brand, tasked with building the world’s first Lexus RC F pro drift car to debut at the Goodwood Festival of Speed. 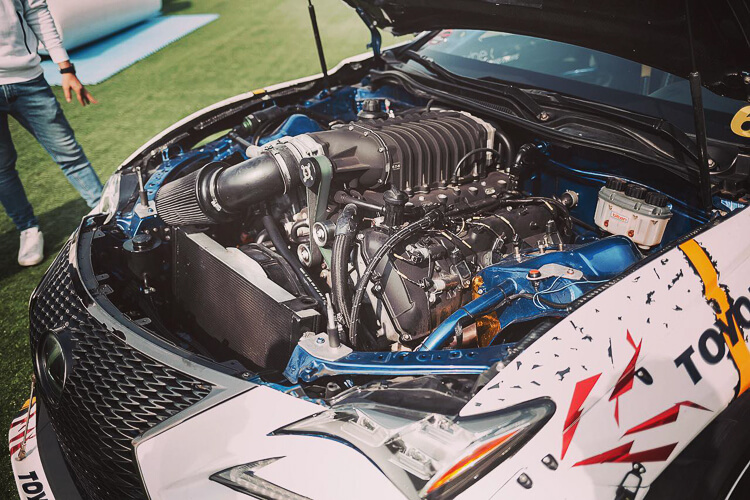 A beefed up version of the factory-fitted 3UR-FE 5.7L V8 was boosted to a staunch 844hp / 858Nm with the help of an Australian Harrop TVS2650 supercharger and a Link G4+ Thunder ECU out of New Zealand, transmitted to 285/35R19 Proxes R888R tyres at the rear by a Samsonas 4-speed sequential gearbox and Competition Clutch twin-plate, with a set of BC Racing coilovers hidden behind the aggressive TRA Kyoto Rocket Bunny bodywork. 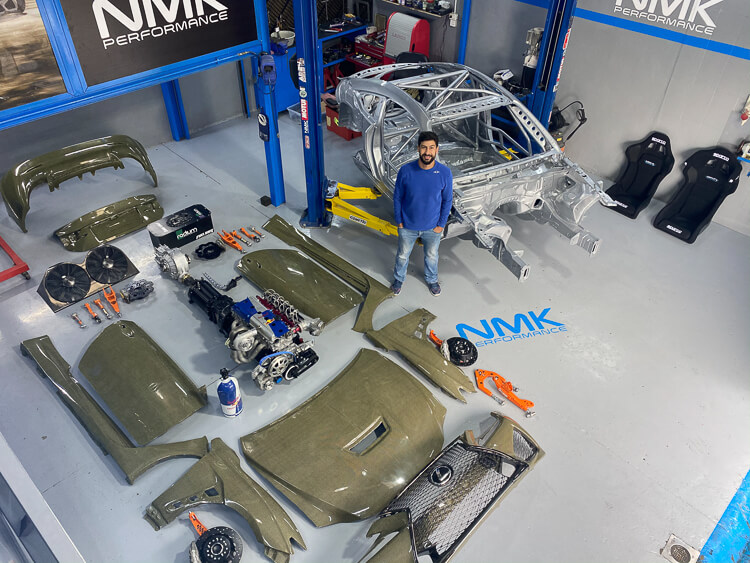 This was believed to be the world’s most powerful RC F at the time but Ahmad was far from finished, doubling down on his relationship with Lexus to build a second, even crazier Lexus RC F, this time with all body panels, including the roof, replaced with lightweight carbon Kevlar® in the same TRA Kyoto Rocket Bunny style. Even with the added weight of a comprehensive roll cage that meets all international competition regulations, Ahmad was able to shed nearly 600kg from a standard RC F for a nimble 1280kg net weight and an impressive 47/53 front/rear weight balance.

The list of high-end parts that lurk beneath this lightweight Lexus’ shell read like a drift nerd’s letter to Santa, so you can watch Ahmad walk through the details himself in the video above or join us for a closer look below, with footage and photos of this beast in action at the end. 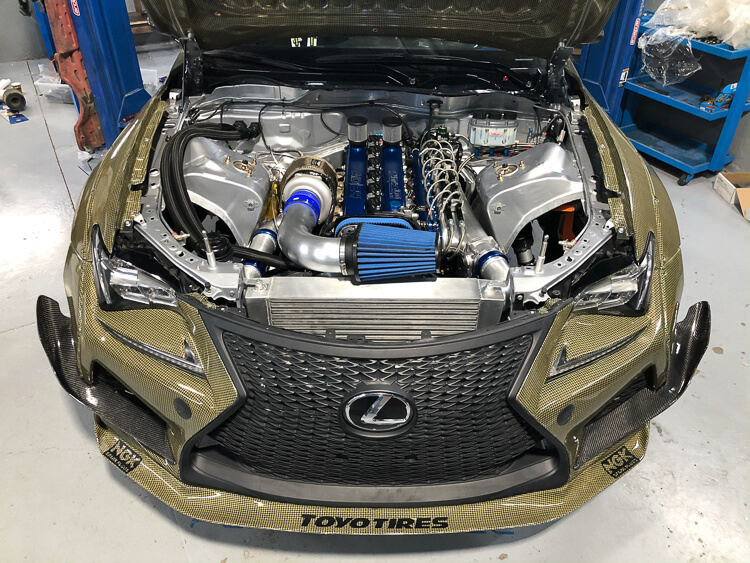 To provide the ponies this time around, Ahmad picked a classic from Toyota/Lexus’ back catalogue, the infamous 2JZ-GTE. A fire-ringed cast block houses CP forged pistons connected to a Brian Crower lightweight crankshaft and H-beam con-roads. The Brian Crower goodies continue into the top end with their 272-degree duration cams and valvetrain perched atop a CNC-ported cylinder head, orchestrating a lofty 9,000rpm rev limit while containing combustion at a stout 10:1 compression ratio. 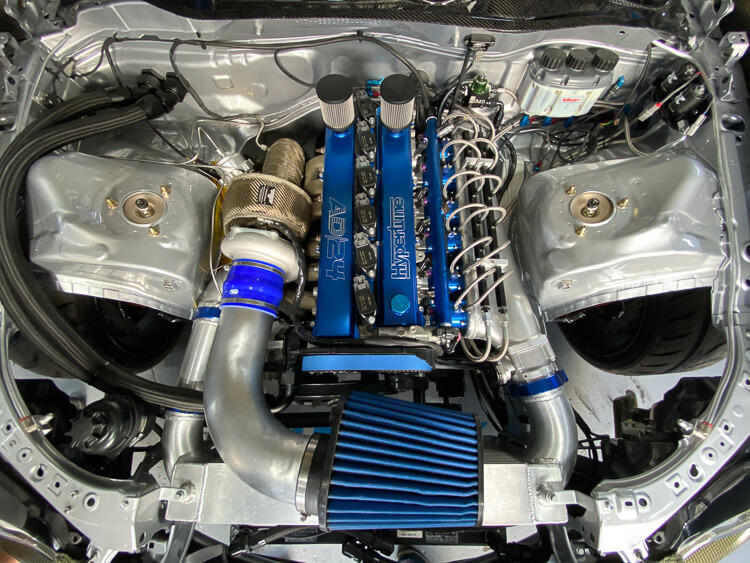 Boost is controlled by a TiAL V60 wastegate and provided by a Garrett GTX3584RS that feeds air through a 3.5-inch Garrett intercooler to an Australian-made Hypertune inlet manifold to meet fuel from 1700cc injectors and 200hp of Nitrous Express giggle gas, making a gargantuan 1200hp / 1,464Nm. 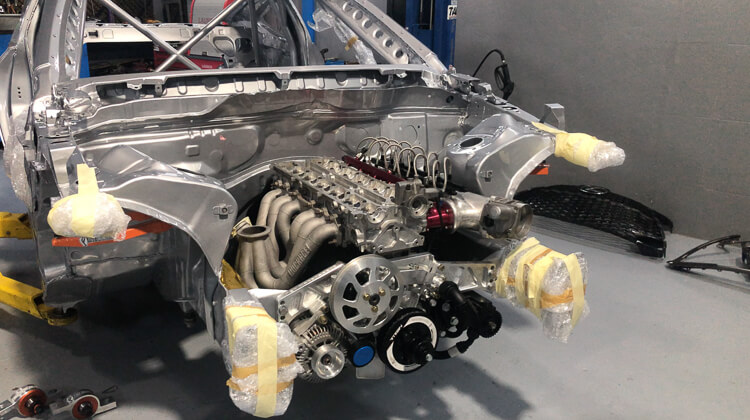 This monstrous motor is mounted as low and far back as possible using a CNC-machined HGK front engine plate and its extreme power level is supported by dry sump oiling from a Titan pump, Peterson tank and dual MOCAL 25-row oil coolers along with a Radium fuel system. 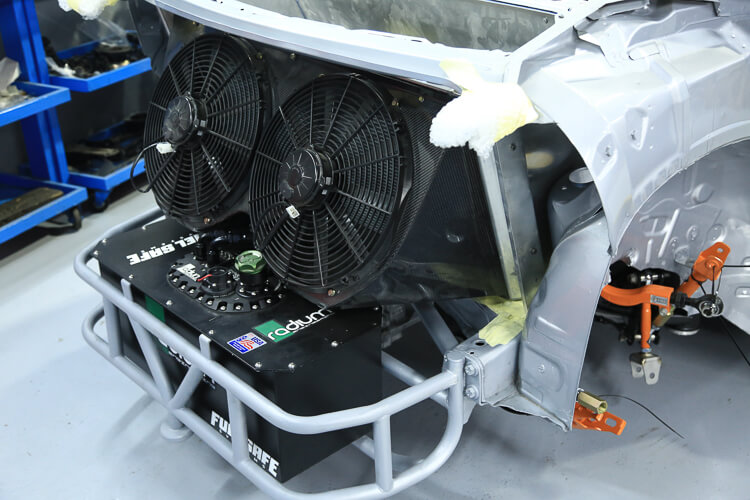 The 10-gallon Radium combined fuel cell and surge tank (FCST) is joined in the rear by a pair of large SPAL fans that use a neat carbon fibre shroud to draw air through the engine’s HGK radiator. This style of rear-mount setup has become quite popular in competitive drifting and has helped Ahmad achieve rear-biased weight distribution to maximise grip while keeping the cooling system safe from front-on impacts. 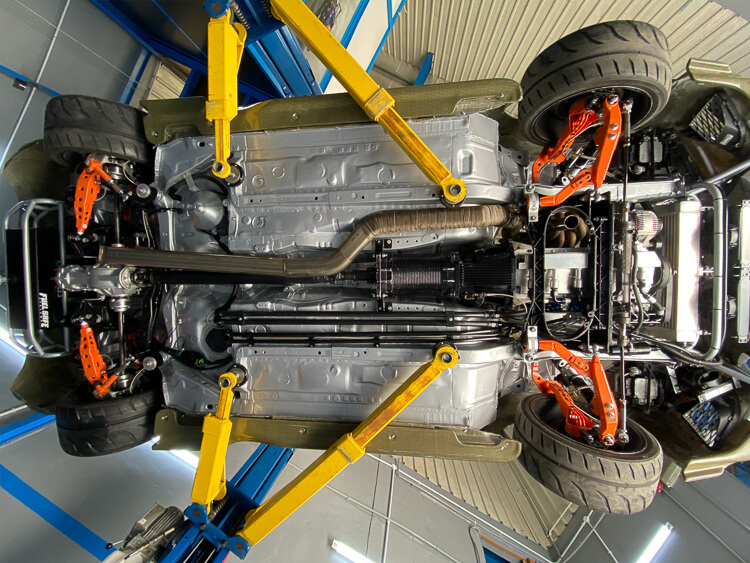 Underneath, you’ll find a Winters quick change rear differential that allows the final drive ratio to be changed in minutes to suit the course, conditions and competition. The diff is then connected to standard RC F hubs by custom carbon fibre driveshafts and to the mighty 2JZ up front by a Samsonas 4-speed sequential gearbox via a carbon fibre tail shaft. The 3.5-inch exhaust has been tucked neatly between the chassis rail and tunnel by using oval pipe for maximum flow without sacrificing ground clearance. 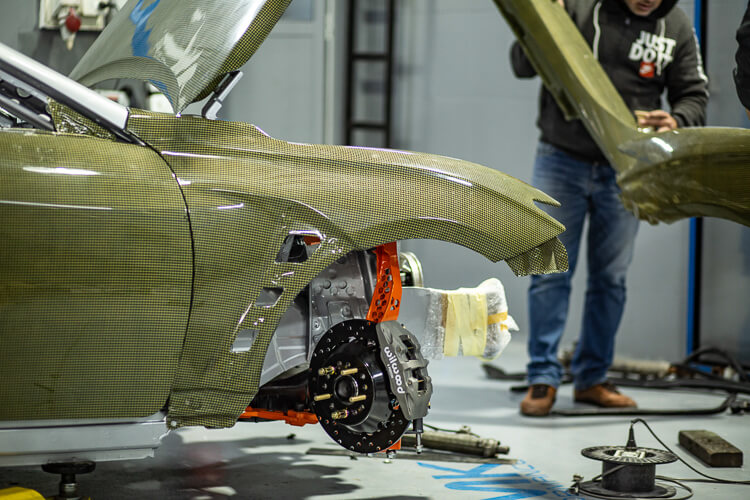 Having dialled in the suspension package of his previous RC F, Ahmad again used BC Racing ZR Series 3-way adjustable coilovers with a full set of suspension arms from FIGS Engineering that provide a wide range of adjustment to maximise grip and steering angle while minimising weight. Making sure that this ludicrous Lexus stops as well as it goes are a set of 6-/4-piston Wilwood brakes, the lightweight ones of course. 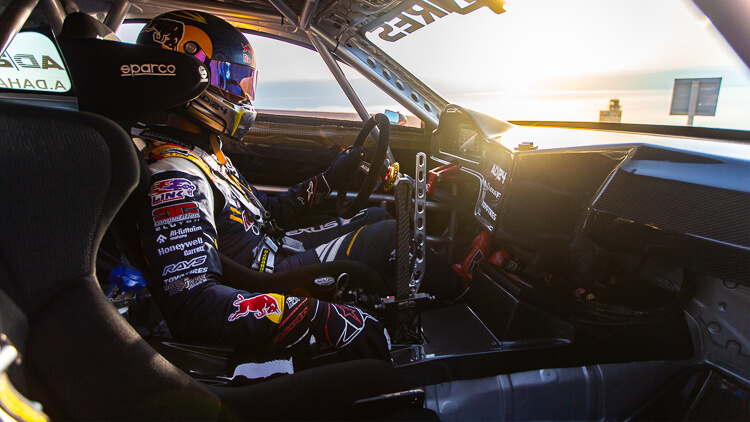 The pursuit of perfect weight distribution even made its way into the interior, with a Tilton pedal box and Woodward adjustable steering column allowing the Sparco seats to be mounted as far back as. A custom carbon fibre dashboard keeps weight down as well while neatly housing a Link MXS dash that’s run by the Link Thunder G4+ Thunder ECU, with everything powered by a pair of MoTeC PDMs that the Link controls via CANBUS. 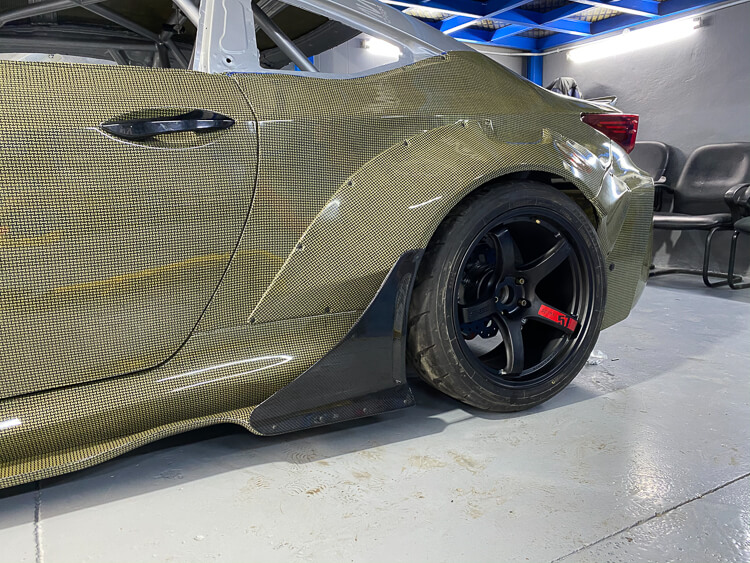 Finely tuned suspension, a beefy driveline and big power supported by the best aftermarket performance brands on the planet don’t mean much without grip, even for a featherweight, so the Proxes R888R ‘semi-slick’ motorsport tyre was chosen as rubber that could handle this vehicle’s extreme performance parameters. 255/35R18s are wrapped around 18x9.5 RAYS Gram Lights 57CRs up front while 285/35R19s join a pair of 19x10.5s in the rear position, ready for punishment. 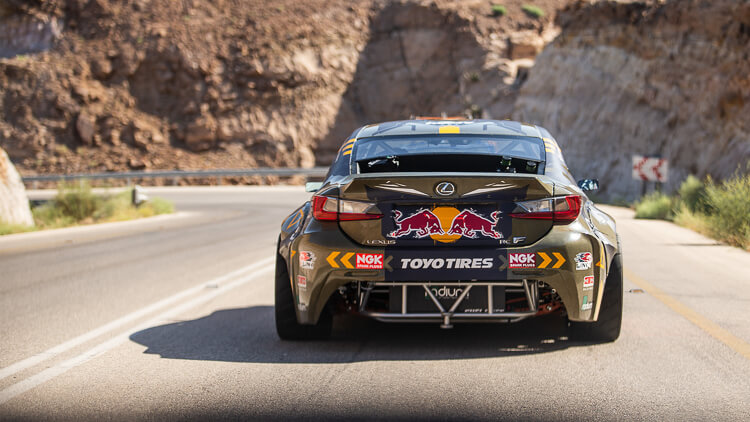 After 6-months of painstakingly piecing this project together, including weeks of 3-hour round trips on a bicycle to reach NMK Performance as Jordan recovered from their COVID-19 lockdown with car-free roads, the world’s wildest Lexus RC F was complete. 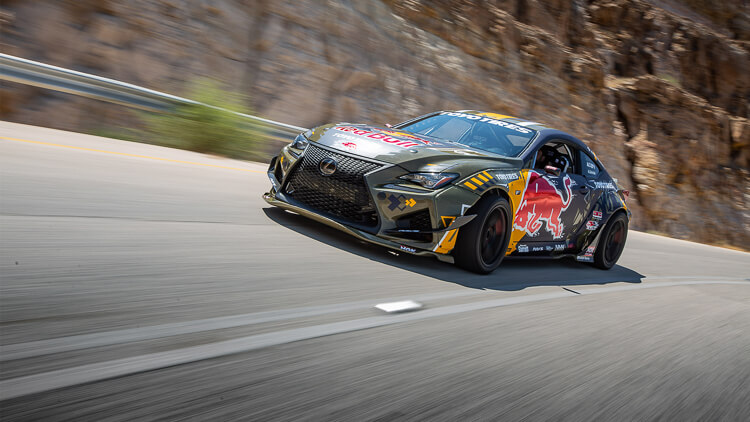 Such an extreme build needed an equally epic unveiling, so a plan was hatched to close Jordan’s iconic Panorama Road and hit it at race pace.

From the Dead Sea’s -430.5m below sea level, Ahmad’s RC F rocketed through a near 800m climb towards the peak of Mount Nebo, with smoke billowing from gripped-up Proxes R888Rs and the carbon Kevlar ® rear bumper brushing up against guard rails to prove that Ahmad is perfectly at home behind the wheel of his second, lighter, more powerful Lexus drift car. 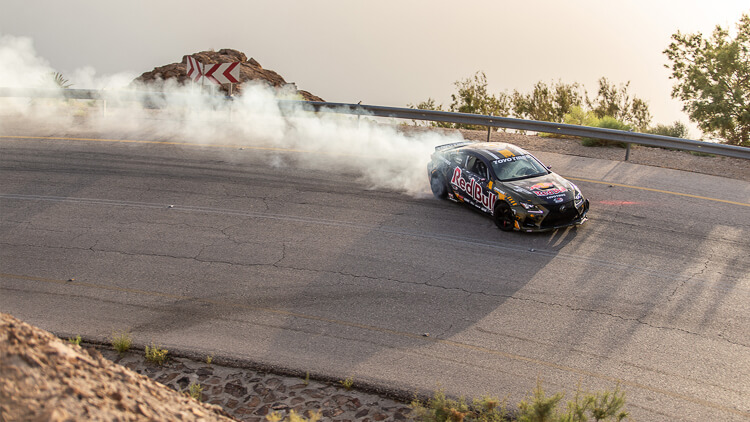 Now that the cat’s out of the bag, Ahmad plans to campaign his carbon Kevlar® creation globally, with entries to the Drift Masters European Championship, Japan’s FIA International Drifting Cup, the UAE and Oman International Drift Championships, and the Goodwood Festival of Speed pencilled in pending COVID-19 travel restrictions. 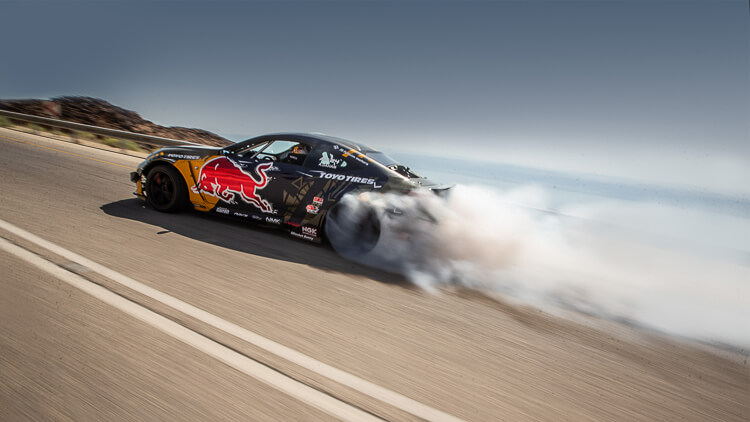 Ahmad’s mantra of ‘sideways is the new way forward’ is embodied in this cutting-edge machine that would make a splash in any motorsport discipline, but it is unmistakeably a drift car through and through. Ahmad credits the near-boundless creativity that competitive drifting regulations encourage for keeping him focused on yes, going fast, but doing it imaginatively with a bit of flair and a lot of smoke. 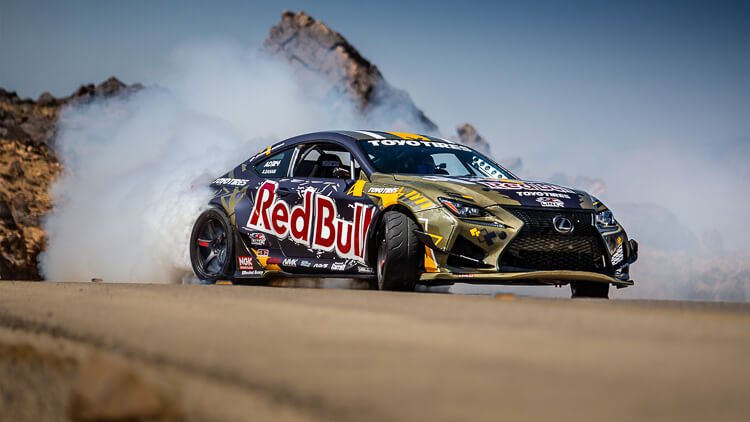 We’re sure this won’t be the last we see of Ahmad Daham and his love affair with Lexus, so be sure to keep an eye on NMK Performance and watch your back at your local drift events, because the #24 carbon Kevlar ® Lexus RC F might be coming in hot to snatch the top step trophy. 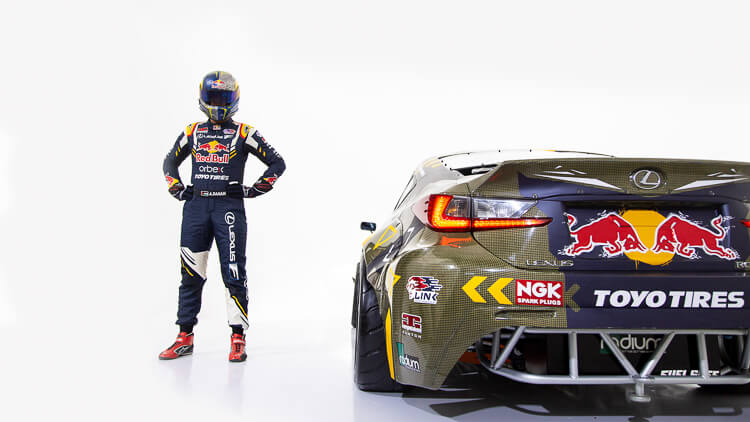