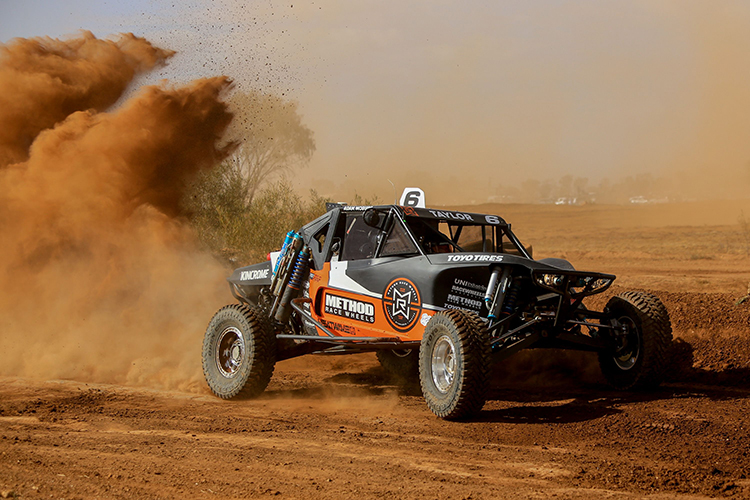 Alice Springs’ iconic outback landscape roared to life this morning as plumes of red dirt marked the first leg of 2021’s Tatts Finke Desert Race. With the starting order and driver separation determined at yesterday’s Method Race Wheels Prologue, the front runners pushed hard for a blistering start to make the most of the clean air they’d earned, with a 750+ competitor field hot on their heels, pushing through the dust over one of Australia’s roughest off-road racing courses for a chance at King of the Desert glory. 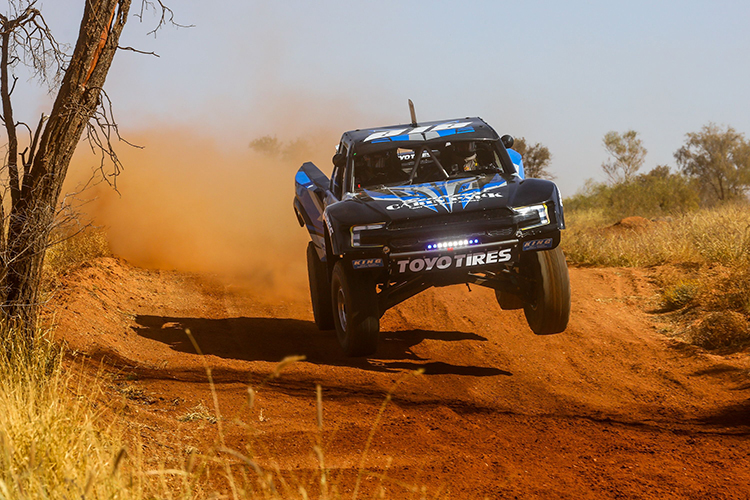 This is where pre-running to memorise the course and months of preparation are finally put to the test, with a solid portion of the field succumbing to attrition and failing to reach Finke as the halfway point at the end of the 230km track, counting themselves out of the race back to the checkered flag in Alice Springs tomorrow. 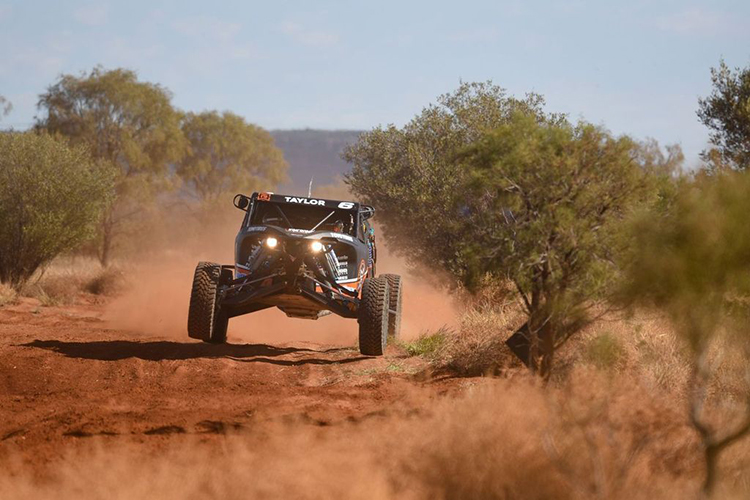 “We’ve just put a new twin turbo 3.5L Cadillac engine in the buggy, backed by a 5-speed Albins sequential transmission with a torque convertor to reduce the shock load on the driveline” said Ryan Taylor, driver of the #6 Race Wheels Australia buggy that arrived in Finke with a time of 1:53:08.9 and an average speed of 119.8km/h to be 14th outright and 6th in Pro Buggy. “It’s got a bunch more power than the last setup, even on the lower 16psi boost setting, and it’s capable of 600hp at the tyres on 18psi, which is impressive considering it’s turning 37x13.50R17 Open Country M/T-Rs. It’s feeling a lot faster and we’re lucky to have our tuner with us to make some tweaks, so with the chassis and suspension feeling great, we aren’t at the point where I’m outdriving the setup anymore. I’m going to keep pushing myself to drive this buggy to its full potential and we’ve already gained a couple of spots at the halfway point from our 18th in prologue, so tomorrow should be interesting.” 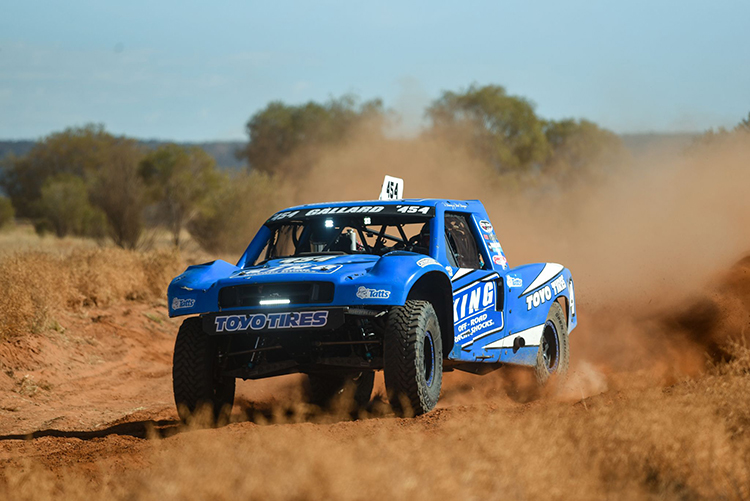 “A lot of the field are using sequential gearboxes, but we’ve stuck with the trusty TH400 manualised auto,” said Brad Gallard, driver of the #454 trophy truck that roared through Finke's finish line in 1:49:27.9 with an average speed of 123.9km/h to be 7th outright and 3rd in Extreme 2WD, chasing a 10:12.3 gap to Toby Price’s record-breaking 1st place run of 1:39:15.6. “There are some advantages on tighter tracks that may see us follow suit with an Albins later on, but on long, fast courses like Finke, you don’t really need the extra gears as you spend most of your time in top, plus the autos are very robust. For most of today, our off-road-race-prepped, billet-blocked, dry-sumped 6L V8 was singing up near its 7400rpm rev limit, pretty much on life support so that we can squeeze the full 800hp out of it for as long as we need to.” 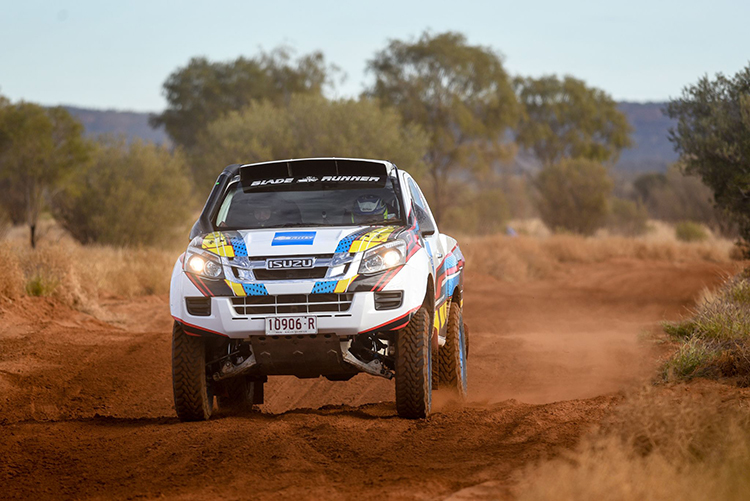 “We know we’ve picked one of the slowest ways to get to Finke and back, but it’s an achievement just to finish that I’m eager to tick off my bucket list” said Glenn Brinkman, driver of the #820 Isuzu D-MAX that hit Finke in 2:59:12.0 with an average speed of 75.7km/h to bring up the rear of Extreme 4WD at 96th outright. “We made it down here, so I’m sure we can make it back, we just can’t hit everything as hard as everyone else. Don’t get me wrong, it’s been built right for Dakar, with the shell and 4JJ1 diesel engine being the only standard bits left, so it’s probably stronger than it needs to be for something like this, we just can’t fit the big tyres under it like everyone else. We followed Bruce Garland’s advice when we bought the car and kept running the 235/85R16 Open Country M/Ts that people can put on their road cars; they’ve been great with no flats, no punctures, they don’t tear lugs off and they wear down nicely.” “Without jinxing ourselves,” adds navigator Dale Moscatt, “we’ve got room for 3 spares, but Bruce only ever ran 1 at Finke and never had a puncture, so we can take the lightweight approach too that’s easier on the car.” 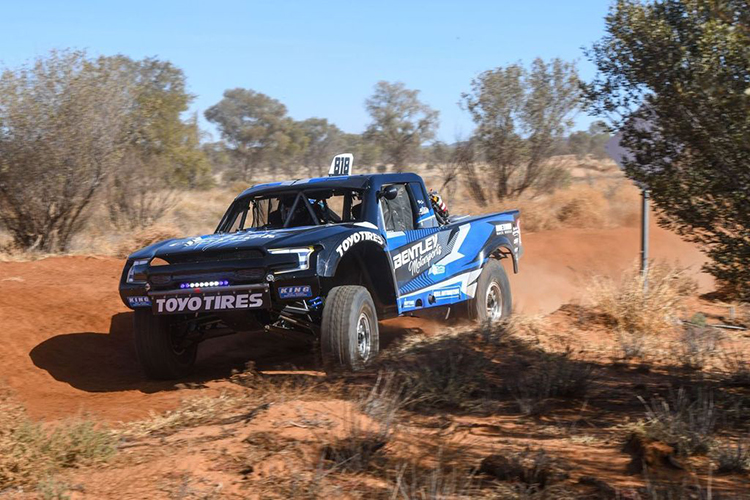 At the other end of the Extreme 4WD pack, Hayden Bentley from Bentley Motorports is leading the charge in one of a handful of 4WD trophy trucks in Australia and the first to enter the Tatts Finke Desert Race. Powered by a heavily modified, billet-blocked VR38DETT out of an R35 Nissan GT-R that’s had its capacity reduced to 3.5L to suit class regulations, this beast is capable of 1000hp+ with the driveline, chassis and King suspension to match. The #818 trophy truck has serious performance potential that Hayden has been working hard to get his head around as a different beast to his previous 2WD vehicles and in the dash to Finke, he managed a 1:51:30.2 with an average speed of 121.6km/h, which put him more than half an hour ahead of the next Extreme 4WD competitor and 9th outright. 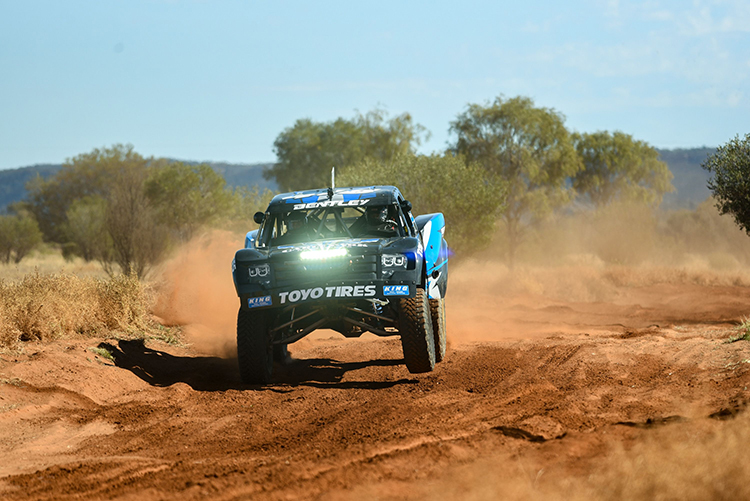 Racing the #418 Bentley Motorsports Extreme 2WD trophy truck this year are the next generation of Bentleys, with Sam (17) doing the return run tomorrow after Hannah (19) made her Finke debut as the first female to race a trophy truck at this event. Both kids have a humble, mindful approach to off-road racing that is far beyond their years, with Hannah giving prologue a red hot crack yesterday without risking the truck for the race before making it to Finke in one piece today with a time of 3:21:06.06 and an average speed of 67.4km/h after multiple stops along the way due to gearbox temperature concerns. Tomorrow, it will be Sam’s turn to also make his Finke debut, focused on reaching the finish line as quickly as he can now that the issue is fixed.

Those who’ve reached the halfway point are certainly relieved but now know full well what the rest of the 2021 Tatts Finke Desert Race has in store for them, so stay tuned for tomorrow’s return leg to the checkered flag at Alice Springs.