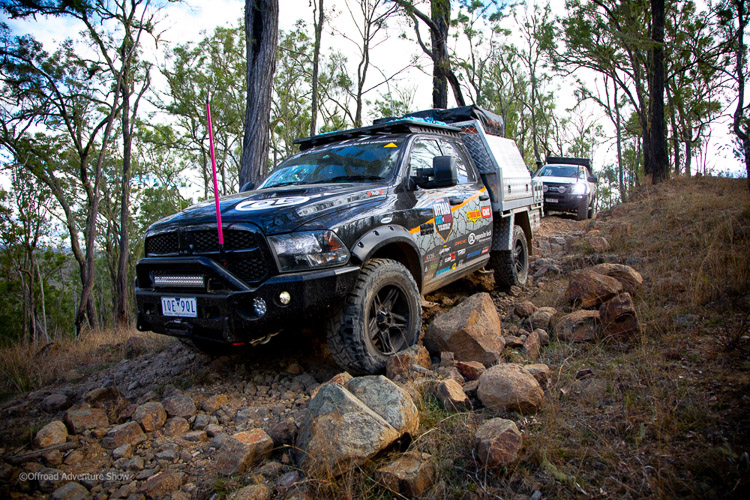 If you’ve been tuning in to the Offroad Adventure Show on Channel 10, you may have noticed that their rigs are rolling on our Open Country rubber this season. With the Toyo Tires HiLux Rugged joining the convoy in last weekend’s episode, piloted by our good friend Bri (@brunette_driven), we wanted to offer you a closer look at the Offroad Adventure show fleet. First, let’s hear from the team. 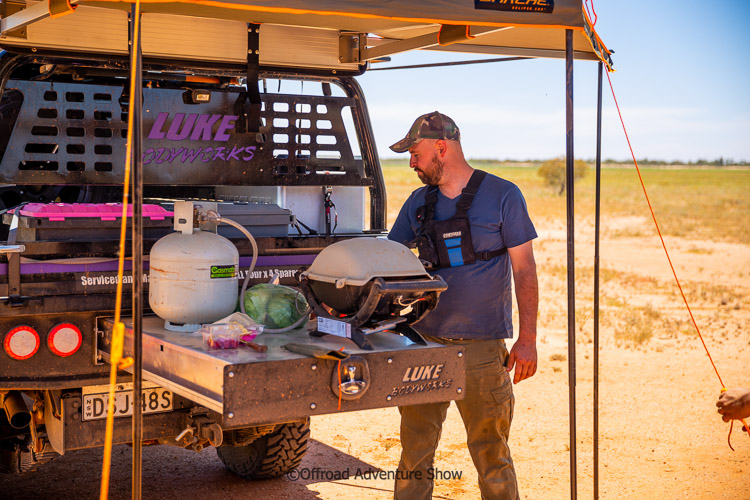 “We have had our eye on Toyo Tires for a few years now,” says David Luke, the self-professed brains behind the Offroad Adventure Show and the bloke putting in the hardest yards on both sides of the camera. “They are one of the few tyre manufacturers with a real focus on the off-road market, and we are really excited to see how their Open Country tyres perform over a wide variety of terrains this year.” 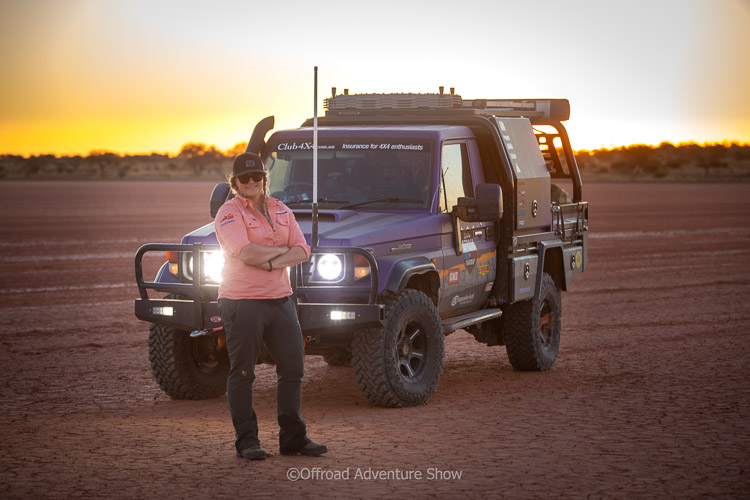 “It’s great to be working with a company that really cares about their products and what they can do down under,” adds Alicia ‘Leash’ Blythe, a presenter for Team NSW in this season’s State of Origin competition. “After just a few minutes with the Toyo Tires team, I could tell they shared our passion for Australia’s favourite pastime. I’m running the Open Country M/Ts on my ‘Cruiser and so far, I can’t fault them. Sand, mud, rocks; they don’t just do their job, they do it really well!” 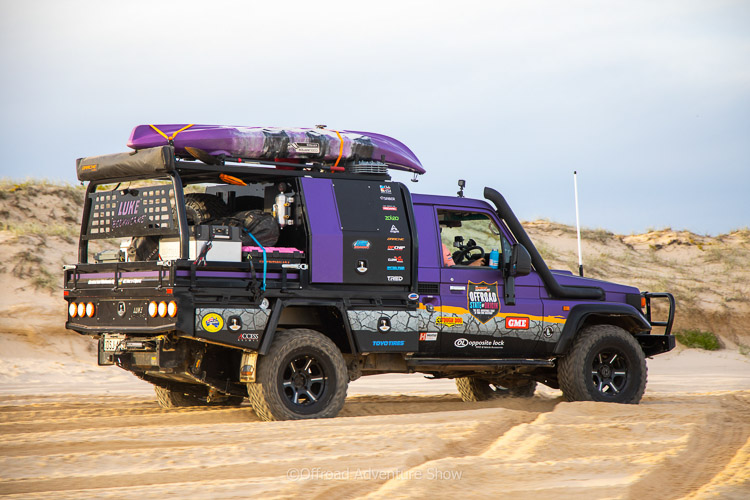 Leash’s 79-Series Toyota LandCruiser is using 285/75R16 Open Country M/T tyres to be specific, which are fitted to a set of Access Alloys Spyder Trax rims and supported by a Tough Dog 2-inch suspension lift. Under the bonnet, you’ll find a freshly rebuilt 1HD-FTE engine breathing through an upgraded GTurbo and a 3-inch exhaust, tuned by Berrima Diesel with a DPCHIP X. 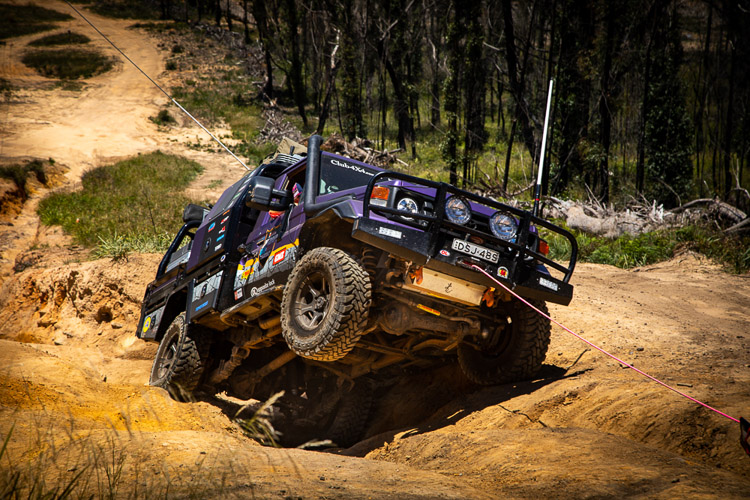 On the outside, Opposite Lock bar work, BushSkinz underbody protection and a sweet custom tray and canopy from Luke Bodyworks make it obvious that Leash’s ‘Cruiser means business, with a suite of Redarc goodies ensuring the electricals are up to scratch too. 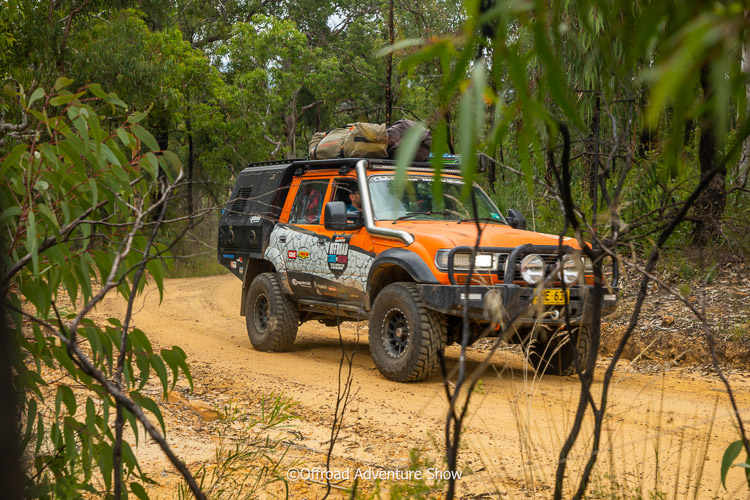 While Leash’s ‘Cruiser is more than capable, Michael ‘Borgy’ Borg is Team NSW’s heavy hitter, with his 80-series Toyota LandCruiser running a Tough Dog 3-inch suspension lift and a set of Access Alloys Spyder Calibre rims wrapped in 315/75R16 Open Country R/T tyres, or 35s in bush talk. Not to be outpaced by Leash, Borgy’s 1HD-FTE engine is also running an upgraded GTurbo and DPCHIP X that’s been tuned by Berrima Diesel. 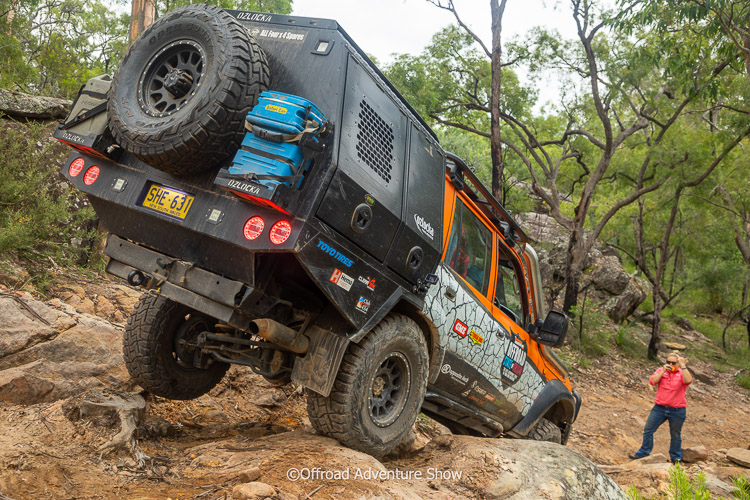 Chopped LandCruiser wagons can be a bit of a touchy topic, but Borgy’s Ozlocka canopy certainly looks the part while providing plenty of storage for longer trips, with a myCOOLMAN fridge complemented by a Clearview Accessories drop slide and pantry to make quick access to critical supplies that little bit easier. Although this big rig has plenty of clearance, Borgy loves putting it through its paces, so Opposite Lock bar work keeps the ‘Cruiser safe from bumps and scrapes, with Saber Offroad recovery points and SaberPro winch rope coiled around a KingOne winch ensuring he can get out of any trouble he gets himself into. 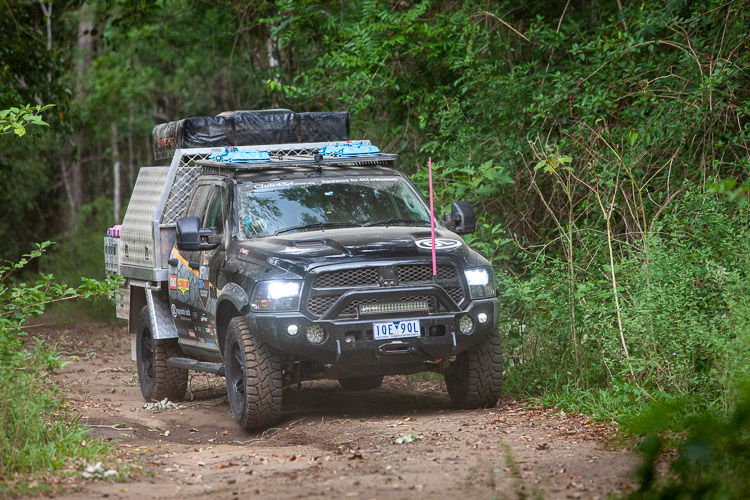 North of the border, Team QLD have a couple of tough touring rigs that are new for this season, and they’ve been eagerly using them to stick it to the southerners every chance they get. ‘Jillaroo Jess’ Edwards is rolling in a RAM 1500 after impressing the team last season in a Holden Jackaroo, with the much larger RAM easily swallowing up a set of 35x12.50R20 Open Country R/T tyres on Access Alloys American Outlaw Lonestar rims with the help of a Tough Dog 2-inch suspension lift. 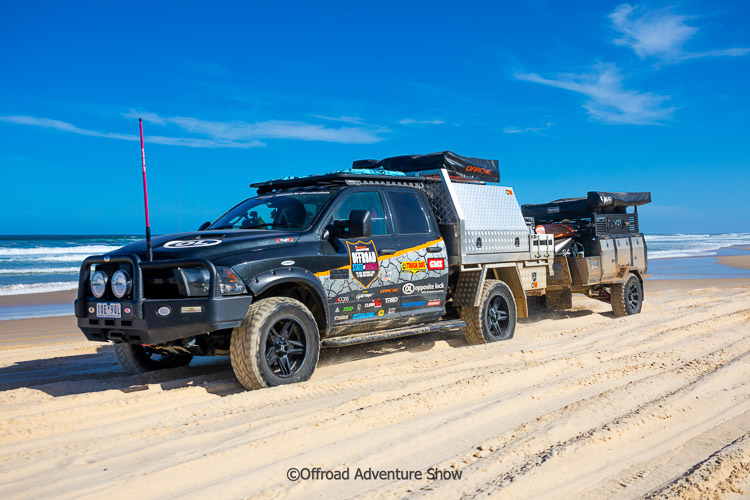 No extra grunt is required from the RAM’s standard 5.7L Hemi V8 engine, even with the extra weight of some sturdy Yubute Fabrication rock sliders and an Opposite Lock bull bar that houses a Saber Offroad winch. At the rear, an alloy tray with twin toolboxes from Tiger Trays provides plenty of room for everything Jess could need on the road, with a Darche roof top tent perched on top. 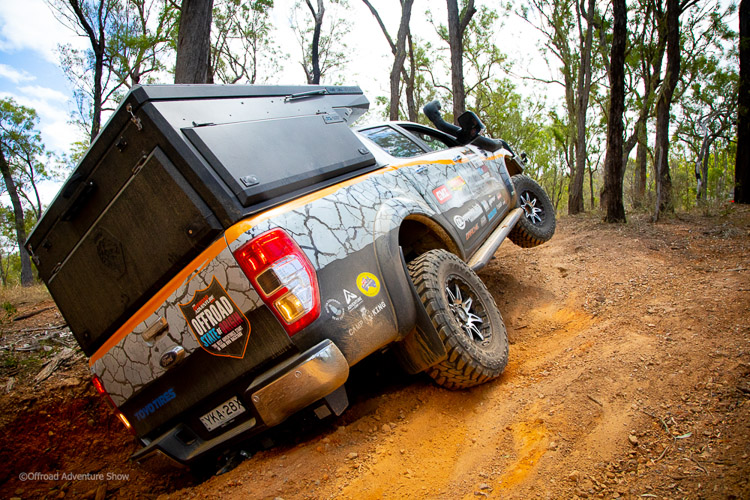 Jess wasn’t the only one thrown into the deep end with a new 4x4 this season, with Jamie Hazelden a.k.a. Australian Bushman making up the other half of Team QLD, ditching his beloved Land Rover Defender for a fancy new Ford Ranger and wasting no time in finding its limits. Jamie’s Ranger uses a Tough Dog 2-inch suspension lift to make room for 295/70R17 Open Country M/T tyres and Access Alloys American Outlaw Doubleshot rims, which are covered with some neat flares from EGR Auto. 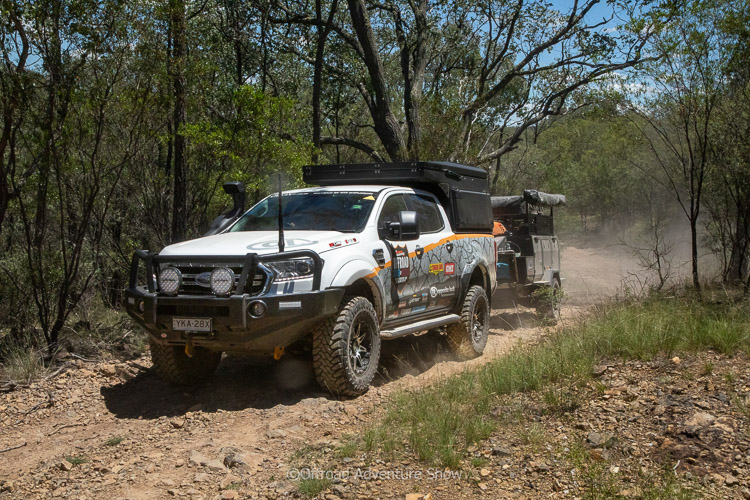 Fellow QLDers Camp King Industries kitted Jamie’s Ranger out with draws and a canopy that includes an integrated roof top tent and houses a 200Ah Redarc 12V system from Jamie’s Touring Solutions, providing plenty of juice for a KingOne winch and a myCOOLMAN fridge in a Clearview Accessories drop slide. Beefy BushSkinz underbody protection complements a bull bar and steel side steps from Opposite Lock to ensure that the Ranger is ready to rock in the tough stuff when duty calls. 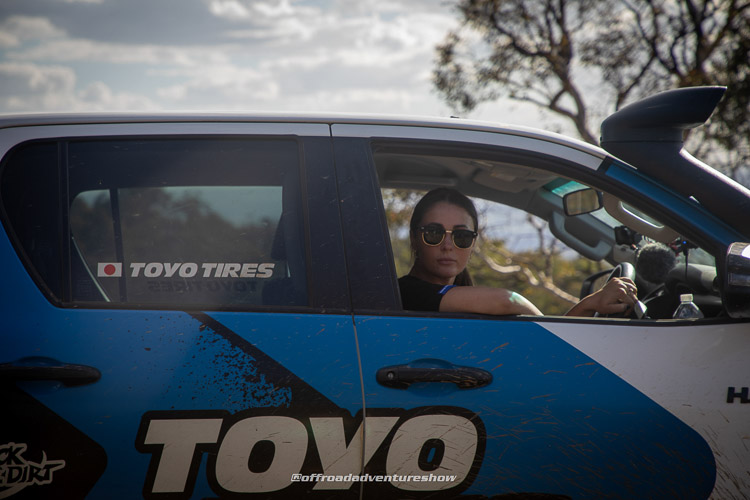 For Season 7’s 9th episode, our good friend Bri joined Team NSW’s convoy behind the wheel of the Toyo Tires Toyota HiLux Rugged. Bri has plenty of off-road experience and can usually be seen sending her GU Nissan Patrol on 37x12.50R17 Open Country R/T tyres over all sorts of serious obstacles, so we knew we could throw her the keys for this adventure to Hill End with the confidence that it she’d bring the HiLux back in one piece. 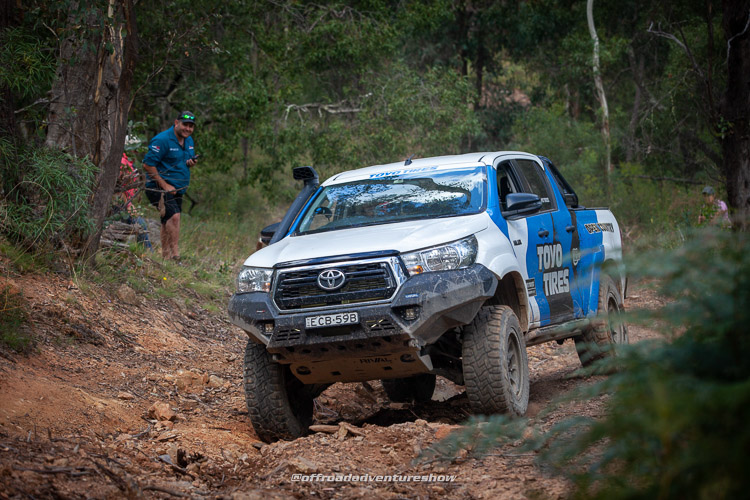 As this Toyota HiLux Rugged is factory fitted with a steel rear bumper and functional rock sliders that are properly braced, a couple of additions from Drivetech 4x4 were all that was required to get it ready to explore the open country. Drivetech 4x4's Rival aluminium front bumper and underbody protection kit improve approach angle while reducing the risk of damaging anything critical underneath. For a bit of extra ground clearance, 285/65R18 Open Country R/T tyres were fitted to 18x9 -12 Method 305 NVs from Race Wheels Australia, covered by a set of Drivetech 4x4's OE-style widened flares. 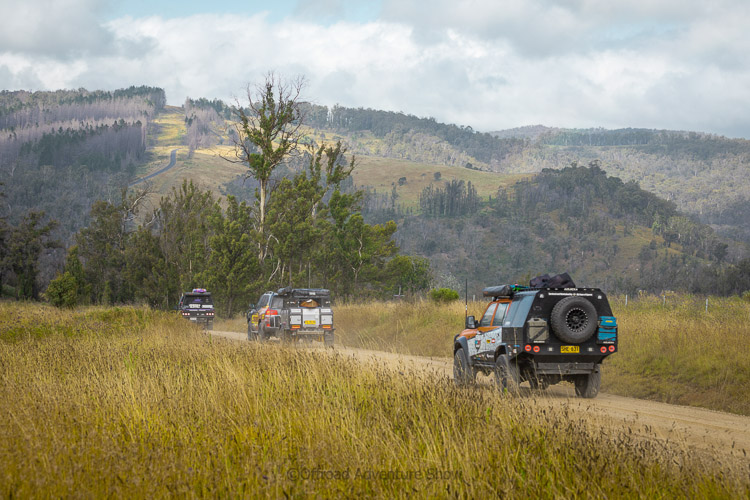 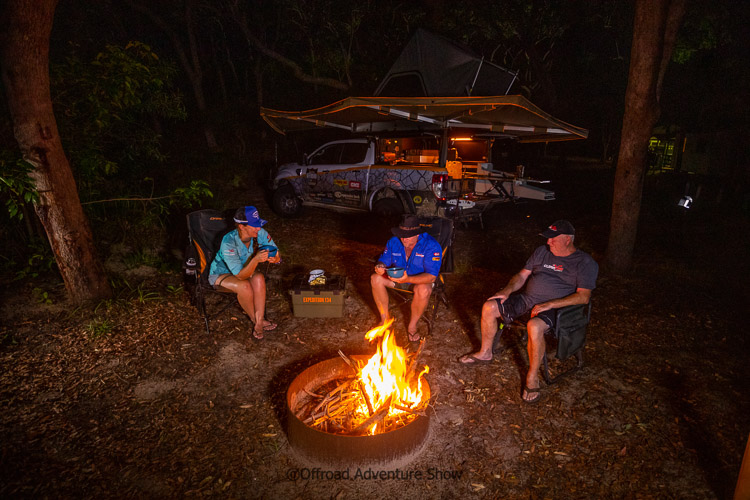